From the Purple Series II 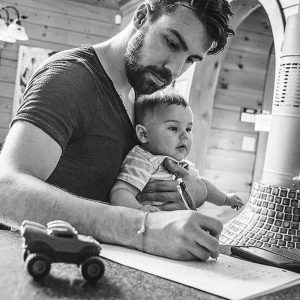 My life's passion for painting and my fascination with our eyes' ability to take in the world around us, has set my soul on a journey to merry the two of them in any way possible, through the lens of oil painting.

Tylor McNeil is an Atlantic Canadian artist living in the west. The fibre of who he is and where his art comes from is still deeply entrenched in his east coast values set in his upbringing.

As a young child Tylor had much difficulty in school. When he and his sister were given oil painting sets on the same Christmas, which she quickly grew bored of, he found his natural calling. Tylor started off by taking over both art sets and, over the next decades, he grew and developed his talent. As he blossomed through art, he was supported by his mother, various school teachers who let him express himself through art, and mainly his sister who, in their teens, would ride around on his motorcycle with him, holding paintings to help present his work to galleries for representation. His sister was, and still is, one of his biggest supporters. Tylor’s father, on the other hand, was skeptical as he held old-school male values which tied him to a belief of what men should be. This would become an overarching theme later on in Tylor’s works. Masculinity and struggles between generations and where males fit into society are continual themes originating from these early days. At one of Tylor’s first art shows, his father realized his son’s talent and seemed to finally understand and accept that it was okay to be different and to value Tylor’s talents as they were.

Tylor’s love of the medium and his growing oil painting skills lead him to Mount Allison University in New Brunswick where he gained formal training , happy to receive schooling with a like minded group of people. After two years of university training, realizing he had gleaned what he wanted from school, Tylor set out to pave his own way. The journey lead him to British Columbia where he spent several years before moving to Cape Breton Island with his wife and child.  There he really came into his own and blossomed as an artist, creating more cohesive bodies of work. He might say it was the sea and salt air, but it was definitely a transition with the birth of his son that propelled him forward into a full time career.  Multiple explorations of a variety of styles and genres followed and Tylor found great satisfaction and challenge in becoming proficient as a nature and floral artist. The past four years of continuously honing his skills in this area resulted in multiple gallery showings in Nova Scotia, securing gallery representation, and a lucrative contract with Canada Post, to name a few highlights. Through this experience Tylor was propelled into becoming a professional artist.

In the past year and a half Tylor has returned to the very west coast of British Columbia on Vancouver Island, where he has a private studio and continues to create and grow his talents in florals as well as toying in plein-air and natural landscapes.

From the Purple Series IITylor McNeil